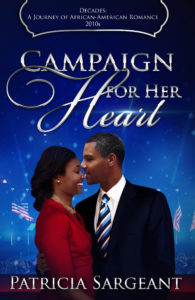 What reviewers are saying about Campaign for Her Heart

Subscribe to my free enewsletter for advance release information.

Watch the Campaign for Her Heart Book Chats with Author Patricia Sargeant:
Episode 1: The Reveal
Episode 2: The Excerpt
Episode 3: The Making Of
Episode 4: Reader Questions

Gwendolyn Taylor has campaigned for President Barack Obama and is committed to working for his reelection. After that, the librarian and activist plans on taking an early retirement – or so she thinks. One of Gwen’s volunteer organizations wants her to help unseat the incumbent state senator – by running for his office. Gwen has her doubts until she meets the senator’s distractingly sexy – and socially unconscious – campaign manager.

Noah Barrow sees his candidate as the best choice for their community. He believes in the senator’s integrity, commitment and platform. Gwen is a very attractive woman – distractingly so – but she is also a policy novice with dreams of political grandeur – or so he thinks. Gwen’s ideas are fresh and different enough that they just might work, but it takes more than promising proposals to run a successful campaign.

With such conflicting ideologies, could Noah and Gwen find a way to merge their platforms for the sake of their community – and their hearts?

Campaign for Her Heart

The restaurant Noah drove them to was listed on Gwen’s budget’s No Try Zone, but since he was paying, she relaxed her restrictions.

“Tell me what you’ve been doing the past thirty-one years?” Gwen’s hunger pangs receded as she ate her garden side salad. The balsamic vinaigrette dressing did a tangy tap dance on her taste buds.

She recognized several of the state’s movers and shakers as she surreptitiously scanned the lunchtime crowd. Gwen wished she’d brought her proposal for a state police oversight commission. She’d hand deliver it to them during dessert.

“Shouldn’t we be talking about you?” Noah glanced up from his salad bowl. He’d flavored his vegetables with blue cheese dressing.

“I want to know about the person who would be my manager if I decide to campaign – and that’s a huge ‘if.’” Gwen sipped her tart lemonade as she studied Noah. She sensed him gathering his thoughts in the silence. Why was he reluctant to talk about himself?

“Since we last saw each other, I’ve worked on dozens of campaigns, mainly for local and state candidates.”

“Your more recent clients have been influential incumbents and promising up-and-comers.”

“Have you been following my career?” Noah’s teasing smile looked forced.

“Don’t flatter yourself.” Gwen tried a quelling glance. It didn’t seem to work. “I did an internet search on you a couple of days ago.”

“Pity.” Noah nudged aside his now empty salad bowl. “I thought you might still have a soft spot for me.”

Gwen’s heart fluttered like it so often had when she and Noah had dated. The fact that she might still have a soft spot for him was worrisome. “Are you flirting with me, Noah?”

“Would that be a bad thing?”

“Let me count the ways.” Gwen set her empty bowl beside his. Her gaze took in the establishment’s shabby chic décor, dark wood paneling and deep red accents. “If I decide to run for office, we’d have to keep our relationship professional.”

“Of course.” But his eyes reminded her that they weren’t working together yet.

Their server appeared at the table with their entrées. Gwen had requested the blackened tuna and asparagus. The aroma of the spicy seasonings made her mouth water. Noah had chosen the blackened chicken with loaded baked potato. Chances were good they’d both fall asleep at their desks later this afternoon.

Noah picked up their discussion once the server had left. “Even politicians should be fairly compensated for their work.”

“I don’t support those policies anymore.” Noah had the grace to look ashamed.

“Oh, come on, Noah.” Gwen had a vague memory of a similar disagreement with Noah thirty-one years ago, shortly before they broke off their relationship. “You and most, if not all, of your associates believe there should be winners and losers. What you don’t seem to understand is that the options aren’t ‘win or lose.’ The options are ‘life and death.’”

“I understand that now.” Noah paused with his silverware in his hands. “But we don’t have to agree on policies to be able to run an effective campaign.”

“I disagree with that.” Gwen returned to her food, but with only half of her appetite. The rest of it was in tatters around the table.

“I haven’t agreed with every policy idea my clients have.”

“Then how could you work for them?”

“Do you agree with every policy of the candidate you vote for?”

“You’re right. We’ve dropped a bombshell on you. I understand you’ll need to think this over, and even discuss it with your husband and family.”

A cloud drifted across his eyes. “My wife died thirteen years ago.”

“No.” Noah seemed to push through sad memories. “You once said that I’d led a charmed life and that was one of the reasons I couldn’t empathize with people who’d had to overcome tragedies and other struggles. Maybe you were right. After my wife died, I changed my position on a lot of policies.”

Gwen had additional questions but sensed this wasn’t the time. “I’ll need time to think this over.”

“Of course. We’re tight on time, though. Let us know as soon as you can.”

“I’ll have a decision by next week. Maybe sooner.” Act in haste, repent at leisure. Why did she have the sense that this campaign would give her a lot of reasons to repent? “I’m concerned that I may be too far out of my element. Maybe my time and resources would be better served helping my neighbors gain a voice in the capital rather than campaigning.”

Noah leaned into the booth table. “Gwen, if you win this election, you would be that voice at the capital for your neighbors.”

The idea had appeal, but what if she didn’t get elected?