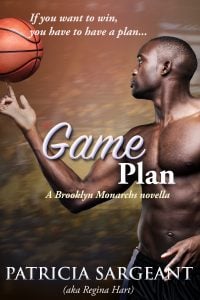 Order print and ebook from Amazon

Subscribe to my free enewsletter for advance release information.

If you want to win, you have to have a plan…

NBA hooper and self-proclaimed Bible scholar Anthony “The Saint” Chambers finally earned his championship ring after his Brooklyn Monarchs crowned their Cinderella season. Now in the offseason, Anthony is planning the next move in his career – more money, fame and game – as the Monarchs lace up to defend their title. But falling in love wasn’t part of the plan …

Struggling artist Faith Chambers is an administrative assistant by day and a promising cartoonist by night. Her plans include publishing contracts, television agreements and paying her rent on time. Yet she risks all of that for a Bible-quoting baller. When Faith’s finances get even sketchier, Anthony’s teammates paint a dubious picture of her real intent. Is Faith drawn to Anthony – or his money?

Will Faith and Anthony’s relationship be sidelined by suspicion or will they stick to their original game plan of falling in love?

“I want to apologize.” Anthony raised his voice so Faith could hear him over the celebratory sounds of Constance’s birthday party.

“What are you apologizing for?” Faith’s chocolate gaze was direct and inescapable.

Anthony stepped closer so he didn’t have to shout. Beneath the scents of confectioner’s sugar and warm hors d’oeuvres, he caught a hint of Faith’s citrus and rose perfume. “I think you know what I’m apologizing for.”

“I know what you should be apologizing for, but why are you actually apologizing?” Her voice carried the barest trace of sinful Southern nights. He could almost smell the magnolias.

“Why are we playing guessing games?”

“I thought you were apologizing.”

“Who put you up to this apology, Troy or Serge?”

“Both.” He wasn’t going to lie. “But you shouldn’t withhold forgiveness just because I didn’t initially realize it on my own.”

“You’re right. ‘For if ye forgive men their trespasses, your heavenly Father will also forgive you.’”

“Matthew six fourteen.” Anthony looked at her with new eyes. “You know your bible.”

“You haven’t cornered the market on sanctimony, Saint Anthony.” She addressed him by the hated nickname that his teammate had given him.

If he corrected her, he had a feeling, she’d ignore him. “Then why won’t you accept my apology?”